You want a ghost? Then you’ll get one. 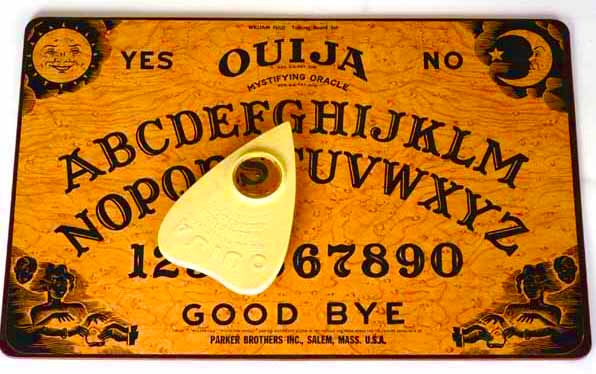 I am a paranormal investigator and psychic medium. Many people ask how does a haunting happen? There are many reasons why a haunting can occur. First one being it can be the residence or location itself. A dramatic event or trauma can leave impressions on a location. Humans are very attached to the physical plane so when they pass or die some of them are still very much attached to people places and things unfortunately.
Second one is the land itself. People that build new houses on a particular land with history will find that before long their house is haunted or infested with paranormal activity. Duh! I like to use the analogy if you build a house on the land that has a really bad bug problem you are going to have a bug problem in that house so to speak.
Third one is someone brings in the entities. Now I know what you’re thinking…Who the hell would even do that, that’s crazy! Well this is one of the more common hauntings I have seen. Some people don’t mean to attract it but they just happen to have certain abilities and sensitivities which makes them susceptible to paranormal activity and that is how it will be for the rest of their lives. These types of people I would suggest learning about their abilities and learning about different techniques in order to control their environment and to ease paranormal infestation. If this happens to be you contact me for a reading and I will advise you how to control it.
Now on the other side of the spectrum are those people who purposely bring in entities into their environment. They either A: perform rituals or spells to bring in certain entities or B: use the Ouija board.
Example B is the most detrimental. People! If you don’t know what you’re doing don’t mess with it Geez! Not to say that the Ouija board is not a useful tool because it is if you know what you’re doing. I always say if you’re not a surgeon don’t do surgery! Of course not everybody follows this advice.
Take for example the second investigation I did with my team The Beyond Investigators. This particular investigation was a little bit past Orlando and it was the second investigation the team was performing  for the homeowners (no names will be provided in order to protect the clients identity). It’s not uncommon to perform more than one investigation because entities will hide from you if they’re not used to you which will yield no evidence. The client insisted that there was paranormal activity so we decided to try again. When I arrived there I noticed two things, One the client had the ghost hunters TV show playing…. Second I noticed more and more people start to arrive like it was a paranormal party. Red flag!
When I met with the homeowners I could tell that they were drinking and inviting people to see the “show”. The team and I spoke and we decided to go ahead with the investigation…now here is the disclaimer: This is something that we do not usually do especially when the homeowner is under the influence. Don’t do that people!! Be sober when you invite people to investigate your home and don’t have a party!! However, the homeowners were having a bad time with the paranormal activity so we were going to be in and out at least we were going to try.
In the initial interview that I had with the female homeowner she had stated that she used her Ouija board often and that she was very “in tune”. That was a correct statement and I did feel that she had some abilities but her knowledge on the subject was very limited and I felt that it was very dangerous of her to use the Ouija board without proper technique. We went ahead and set up the equipment, we set up the recorders to conduct EVP sessions, EVP stands for electronic voice phenomenon, this is where our technological devices are a little bit more sensitive and can capture voices that are otherwise unheard by the human ear. We set up a night vision cameras strategically placed throughout the home where activity is more prevalent. We also set up a laser grid which will allow us to see any movement within the room.
I did a quick walk-through throughout the house and I noticed two entities in particular, one in the kitchen and one in the main living area. The entity in the kitchen was a cowboy or he worked on a farm, he had a hat and a bad attitude. The second entity is where my heartstrings get tugged here because she was a young child. The man in the kitchen swore up-and-down that he belonged there and that he had ownership which is bullshit because he’s dead and he does no longer have any ownership but dead people don’t get that fact sometimes. I felt the cowboy in the kitchen was the one doing the most harm, touching people ,whispering and movement of objects. The little girl entity just happens to be lost but she did have an element of playfulness. I did also sense a grown female in the bathroom but she didn’t really do much so I did not inquire further.

We went ahead and did our typical investigation…EVP sessions, asking questions and noting any anomalies on the night vision cameras. We did notice a lot of movement on the night vision cameras,orbs mostly. Other than that evidence was minimal. At the end of the investigation I briefly spoke with the homeowners which by that point we’re getting into pretty heavy intoxication so it was difficult communicating. At this point the female homeowner denied using the Ouija board….. yeah I don’t think so. Don’t lie to me people because I know when you are… especially when you already confided to me that you in fact use the Ouija board. If the homeowners were sober I could instruct them better but that was not the case. They asked me what could be done and I in formed them that even if I came in there and did a complete clearing on the home, the fact that they used the Ouija board would trump any cleansing that is performed. I just gave them the advice to stop using the Ouija board immediately.
Intuitively I knew that the homeowners would in fact continue using the Ouija board and paranormal activity would not cease. Again I can only help others who help themselves. The fact is the female homeowner really wanted the ghosts there and that’s exactly what she got. Curiosity can get the best of us and I above all others understand this. Dabbling however can get you into trouble… if you truly are curious learn the proper steps and techniques in order to explore safely.
If you or anyone you know are having TRUE paranormal problems please contact my team The Beyond Investigators of Orlando and we will do it we can. Be safe and be smart!

This entry was posted in Ghosts, paranormal, paranormal activity, Spirits. Bookmark the permalink.