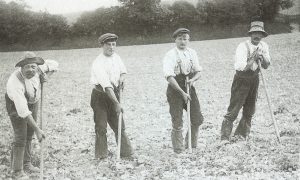 How many times have I been asked…”Why is my house haunted?!?”   Too many to count really.  Let’s face it, people have to deal with paranormal problems.   Some people choose to except it and ignore most of it…for years even!  I get why…they think that if you ignore it, it will go away….Hell no!   That’s not how it works.  Ignoring it sometimes exasperates the situation.  These entities are making a ruckus for a reason….to get your attention!   What happens when you ignore an entity that wants your attention?  It will increase it’s efforts to get the attention it desires.

Why would entities even care what we think?  Think about it.   These dead folks are no different than living folks…they have all the hang ups and emotional problems that living people have…they just don’t have a body. If you were walking around trying to talk about your problems to people that can’t hear you…wouldn’t you starting banging pots and pans? These hang ups and issues don’t go away, even after a haunted house has been demolished.   What happens when the haunted house is demolished?…..welp….you get haunted land!  Yay!  (she said in a sarcastic tone)   Then what happens when you build a new house on the land?  Boom!  Another haunted house complete with dead peeps with issues.

Take for example a paranormal investigation my team and I did just outside Orlando.  I am with The Beyond Investigators of Orlando.  The lead investigator received a message from a woman that was living with her family in a fairly new home.  They had complaints of a dark figure entering the living room when they were watching TV.  When the lead investigator was interviewing the family, he heard the disembodied voice of a woman….they all experienced and heard the voice at the same time.    The building itself did not have much history to it.  When I arrived I immediately asked if I could do a walk through.   First thing I encountered were three lovely dressed women (I’d say late 1800’s) Sipping tea in the family room…chit chatting away like nothing has changed since their time.  They kinda of looked me up and down ( probably wondering why I was dressed so inappropriately) they continued sipping tea.   Interesting….

The next entity I encountered was a man in the hall way.  He was a laborer type who passed away from a fall.  He stated that he worked the land and felt entitled to come and go as he pleased.  He died falling from a ladder and suffered a head injury.   I felt he was the main source of the activity.  I did feel a presence of an elderly woman in the one of the rooms…( I later learned it was the home owners mother), I felt a young adolescent energy (…home owner confirmed it was a rebellious daughter who was still alive that practiced white magic previously in the home), and an old man in the attic (who didn’t do much at all).

As we moved forward with the investigation, the night vision cameras captured orbs galore.  They had been following us throughout the home.  I had a device called an OVILUS in my hand.  This device has a database of thousands of words.  It also takes readings of the surrounding environment including Electromagnetic Field, Ions in the air and other environmental factors.  Then these readings are assigned a number and each number is associated with different words.  The device then speaks and displays the word.  The theory is that entities can influence the EMF and Ions in order to communicate through the OVILUS.  As we went on, the OVILUS wouldn’t shut up.  It was displaying words like FALL, LAND, WORRY, PARANORMAL.   The Land worker entity was pretty worried we were here to remove him.  He strongly felt that this was HIS land.

I went on to ask more questions and at that moment I saw movement of energy.  I quickly said “Hey guys I see movement!”  Two seconds after I said that the lead investigator’s chain around his neck got pulled.   It was obvious this entity had a lot of hang ups about people moving in on his territory so he was not shy to show it.   After the investigation, the homeowner inquired why there was a haunting in their home. She was explaining that the home itself is not that old and they have never had a truly traumatic event to warrant such activity.    I quickly explained that it had nothing to do with the house itself.   It was their land.  Turns out before the house was built it was orange groves worked by many laborers.  Of course it came with a history of accidents and death on the land.   With this kind of case it’s not a matter of just burning sage and doing a house blessing.  The land itself needs to be cleansed which requires a little more than a priest from your local church.   I gave them the option of performing this for them ( I do charge separate from the team, it’s an equal exchange so I would rather not hear everyone’s opinions on it ;)).  I never heard back from them again.   I guess they decided to stick out and ignore the situation.   I don’t see that working out very well….good luck to them.

If you or anyone you know are having TRUE paranormal problems please contact my team The Beyond Investigators of Orlando and we will do it we can. Be safe and be smart!

This entry was posted in Ghosts, Info on me, Land hauntings, paranormal, paranormal activity, Spirits. Bookmark the permalink.