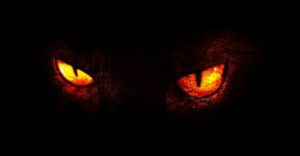 You may or may not be aware that I am a paranormal investigator. I am with The Beyond Investigators. What does that mean exactly? Well that’s just it, we go to peoples houses or places of business and conduct scientific investigations using the latest technology in order to capture evidence of paranormal activity. We then give the client the evidence. Sounds humdrum? It can be sometimes. Everything that you see on the shows can be bull shit. It’s just that…..a show. Sometimes we don’t capture anything and sometimes we do. I myself sense waaaaay more than what our technology can capture.Take for instance an investigation we did in Daytona. (No names will be provided in order to protect the identity of the client.) This was my very first investigation with the team. Before I even got there I knew we were dealing with a demonic entity. Crap!!! My very first investigation and this is what I have to deal with? I have dealt with them in the past and know they can be some nasty customers. Was I afraid? No… More nervous than anything. I also knew that this thing was not a General (high ranking), it was in fact a foot soldier…. Not very powerful but can still inflict damage. The family was already complaining of being scratched, children and animals being harassed and exasperating feelings of depression.
As soon as I walk in I sensed it’s presence. It immediately recognized that I knew it was there and bolted. It stayed away from the investigators and myself. It did not want to be found out. So we continued on with the investigation per protocol. Some orbs were captured on the night vision cameras but that was pretty much it…. Like I said it did not want to be captured. Entities will do that… They can cause havoc then hide like cowards.

It wasn’t until we pulled out the Spirit Box. The Spirit Box is a device that filters through radio frequencies at a very high rate which sounds like white noise. The theory is that entities can speak through these frequencies. So we started asking questions. Different members of the team took turns asking questions….. Nothing. I then hopped on and asked “how does it feel to know that I know what it is?” Immediately it came through the spirit box and shouted “You’re Ugly!” I then asked “what if I brought in St Michael the Archangel to come in and put his flaming sword up it’s ass?!” It retorted “F*** you!!” What a mouth he had on him! Not long after that the lead investigator was physically touched.

This thing is devoid of divine love, empathy or light. One of the things people don’t realize is that with paranormal investigations there is a real chance you will encounter demonic entities. Some are like the one I’m talking about and can poke and scratch you. Others can take a grown man and throw him clear across the room. There is always a risk. The best thing to do is call the professionals to deal with it.

I ended up finding out this demons name and crossed it over to God’s white light. It’s a different spin on how to handle demons. Usually it’s about punishing them and casting them back to hell. I would rather forgive it and send it back to God.

The client herself had abilities meaning she was sensitive like I am. She was pretty much attracting paranormal activity into her home. She had no interest in learning more about it in order to protect herself. We can only help those who help themselves.

If you or anyone you know have TRUE paranormal problems and need help, contact my team The Beyond Investigators of Orlando. We will do what we can. In the mean time be safe and smart about it!

This entry was posted in demons, Info on me, paranormal, paranormal activity. Bookmark the permalink.

2 Responses to My first demon